The 6 Stages of the Product Life Cycle

When I was 12 years old, I used to look through my older cousin’s CD collection, a little confused.

I didn’t understand the need to have CDs when I could go on iTunes and listen to all my favorite songs. Then, when I was in middle school, I got my first hand-me-down iPod shuffle.

This is a great example of the product life cycle (PLC) in action. CDs were in the decline stage while the iPod was in the growth stage. Now, you’ll rarely find a CD in anyone’s music collection unless they’re enthusiasts or want to feel nostalgic for their younger years.

No one wants their product to become “obsolete” and reach the end of its product life cycle. Still, it’s important to understand what stage your product is in so you can make better marketing and business decisions. You can mature and grow in the marketplace by agilely responding to changing customer needs, adding new offerings to your lineup, and adopting new tech that keeps you up-to-date in the marketplace.

As marketers, it’s important to understand how your tactics and strategies change depending on the stage your product is in.

For example, a brand new product will be marketed differently than a well-established, mature product. For the first, the marketing campaigns will focus on raising awareness, while for the latter, they’ll focus on maintaining awareness.

Businesses also use to product life cycle to achieve the following: 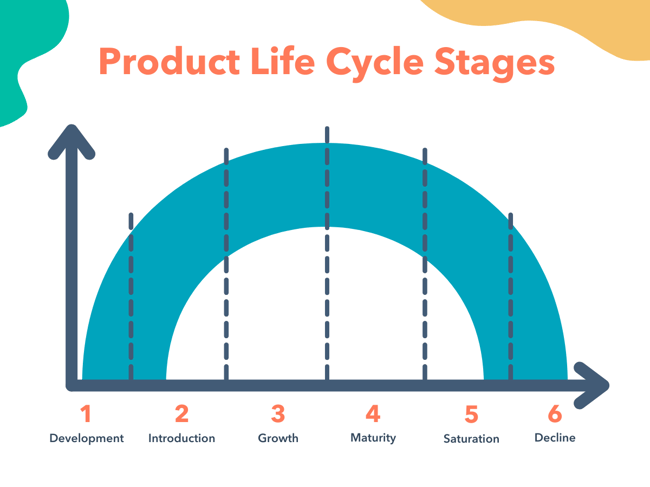 The product life cycle benefits businesses because they can shift their wording and positioning to best market the product at the stage it is in. If your product has recently been introduced and you try to market it as a long-established solution, consumers will see right through it and trust you less as a result.

The development stage of the product life cycle is the research phase before a product is introduced to the marketplace. This is when companies bring in investors, develop prototypes, test product effectiveness, and strategize their launch. Due to the nature of this stage, companies spend a lot of money without bringing in any revenue because the product isn’t being sold yet.

This stage can last for a long time, depending on the complexity of the product, how new it is, and the competition. For a completely new product, the development stage is hard because the first pioneer of a product is usually not as successful as later iterations.

While marketing typically begins in the introduction stage, you can begin to build “buzz” around your product by securing the endorsement of established voices in the industry. You can also publish early (and favorable) consumer research or testimonials. Your marketing goal during this stage is to build upon your brand awareness and establish yourself as an innovative company.

The introduction stage is when a product is first launched in the marketplace. This is when marketing teams begin building product awareness and reaching out to potential customers. Typically, when a product is introduced, sales are low and demand builds slowly.

Usually, this phase is focused on advertising and marketing campaigns. Companies work on testing distribution channels and try to educate potential customers about the product.

This is where the fun begins. Now that the product is launched, you can actually promote the product using inbound marketing and content marketing. Education is highly important in this stage. Your target consumer must know what they’re buying before they buy it. If your marketing strategies are successful, the product goes into the next stage — growth.

During the growth stage, consumers have accepted the product in the market and customers are beginning to truly buy in. That means demand and profits are growing, hopefully at a steadily rapid pace.

The growth stage is when the market for the product is expanding and competition begins developing. Potential competitors will see your success and want in.

During this phase, marketing campaigns often shift from getting customers’ buy-in to establishing a brand presence so consumers choose them over developing competitors. Additionally, as companies grow, they’ll begin to open new distributions channels and add more features and support services. In your strategy, you’ll advertise these as well.

The maturity stage is when the sales begin to level off from the rapid growth period. At this point, companies begin to reduce their prices so they can stay competitive amongst growing competition.

This is the phase where a company begins to become more efficient and learns from the mistakes made in the introduction and growth stages. Marketing campaigns are typically focused on differentiation rather than awareness. This means that product features might be enhanced, prices might be lowered, and distribution becomes more intensive.

During the maturity stage, products begin to enter the most profitable stage. The cost of production declines while the sales are increasing.

When your product has become a mature offering, you may feel like you’re “sailing by” because sales are steady and the product has been established. But this is where it’s critical to establish yourself as a leader and differentiate your brand.

Continuously improve upon the product as adoption grows, and let consumers know in your marketing strategy that the product they love is better than it was before. This will protect you during the next stage — saturation.

During the product saturation stage, competitors have begun to take a portion of the market and products will experience neither growth nor decline in sales.

Typically, this is the point when most consumers are using a product, but there are many competing companies. At this point, you want your product to become the brand preference so you don’t enter the decline stage.

When the market has become saturated, you’ll need to focus on differentiation in features, brand awareness, price, and customer service. Competition is highest at this stage, so it’s critical to leave no doubt regarding the superiority of your product.

If innovation at the product-level isn’t possible (because the product only needs minor tweaks at this point), then invest in your customer service and use customer testimonials in your marketing.

Unfortunately, if your product doesn’t become the preferred brand in a marketplace, you’ll typically experience a decline. Sales will decrease during the heightened competition, which is hard to overcome.

Additionally, new trends emerge as time goes on, just like the CD example I mentioned earlier. If a company is at this stage, they’ll either discontinue their product, sell their company, or innovate and iterate on their product in some way.

While companies would want to avoid the decline stage, sometimes there’s no helping it — especially if the entire market reached a decline, and not just your product. In your marketing strategy, you can focus on nostalgia or emphasize the superiority of your solution to successfully get out of this stage.

The best companies will usually have products at several points in the product life cycle at any given time. Some companies look to other countries to begin the cycle anew.

The international product life cycle (IPL) is the cycle a product goes through in international markets. As products begin to mature and companies want to avoid the decline stage, they’ll typically begin to explore new markets globally. When products reach mass production, manufacturing and production shifts to other countries as well.

The international product life cycle stages are identical to that of a normal product life cycle. The development stage looks differently, however, because local customs and regulations can affect how long it takes to bring the product to a new marketplace.

Beware: once you lay the groundwork in a new marketplace, your competitors will be sure to follow, and the life cycle stages will continue up until saturation and eventually decline. Your option is to either expand into another market or learn from prior mistakes and innovate before the decline stage rolls around.

Next, we’ll look at some examples of product life cycles.

Let’s follow the product life cycle of popular products that have since reached the decline stage.

The typewriter was the first mechanical writing tool — a worthy successor to pen and paper. Ultimately, however, other technologies gained traction and replaced it.

Skipping forward to the 21st century, we see the rise and fall of Vine, a short-form video sharing app that was the source for many a meme at its peak but eventually declined due to other platforms.

Remember the days of switching TV channels to find what to watch? I do — and they feel distinctly like something of the past. While cable TV is still around, it’s safe to say that it’s nearing the decline stage.

Whether you’re developing a brand new product or working with a mature, well-established brand, you can use the product life cycle stages as a guide for your marketing campaigns. Each stage will dictate how you inform your audience about the product, how you position your brand in the marketplace, and how you decide to move forward after the decline stage. By keeping your product’s life cycle in mind, you can invest in better marketing campaigns that result in a higher ROI.

Editor’s note: This post was originally published in January 2020 and has been updated for comprehensiveness.