What is Public Relations? The Definition of PR in 100 Words or Less

Image is an important aspect of brand awareness, which influences whether your potential customers know, like, and trust you. Where publicity is outside a brand’s control, public relations (PR) is an effective way to contribute to the conversation.

Public relations isn’t an easy profession to define. In fact, in 2012, the Public Relations Society of America (PRSA) accepted a few thousand submissions before finally agreeing on one: 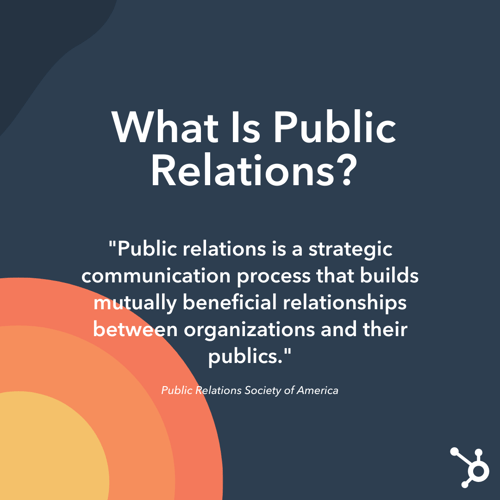 So how can an organization take its beneficial relationship to the public and turn it into good press? Are you really “praying” for something, like the old saying goes, if you’re using a strategic process to get results?

What is a public relations professional?

A public relations professional is in charge of creating and executing a PR strategy, helping a business or individual cultivate a positive reputation through various unpaid or earned channels and formats, including press, social media, and in-person engagements. They also help clients defend their reputations during crises that threaten their credibility.

In order to understand this, you must first consider the two sides of PR: the positive storytelling side and the negative damage-controle side.

If an organization is proactive about their image, they will likely be investing in positive public relations where a PR professional helps portray the brand’s reputation, idea, product, position, or accomplishments in a positive light.

These unpaid or earned avenues include:

Let’s say you work for a small interior design company, and your business just won an award: “Best Interior Design Company in Chicago.” A PR specialist might draft a press release and conduct outreach to reporters to write a story about this accomplishment to spread the news to the public.

Along with building a credible reputation for your interior design business, the PR professional is also helping the public receive relevant information about this accolade. If I’m a consumer looking for an interior designer, this announcement could help me, too.

Public relations extends to government, too. PR professionals can execute political campaigns or explain a government’s new policy to the public. In this case, you can see how PR professionals work to maintain a healthy and productive relationship between their client (the government) and the general public, who have a right to hear about new policies. 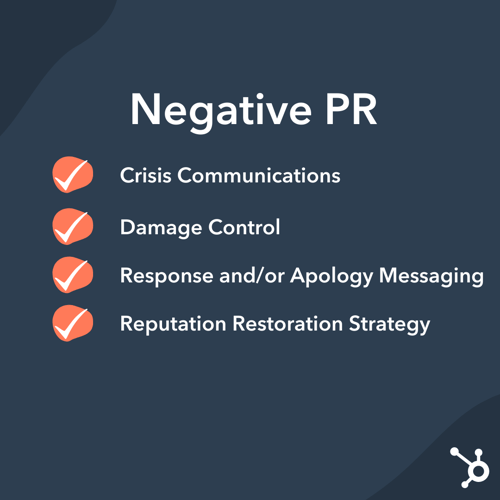 PR isn’t just used for positive storytelling. It’s also used to mitigate any damage that could weaken a client’s reputation.

If public discourse around a particular brand has a negative sentiment, perhaps as a result of negative publicity or news, a PR professional’s job is to advise the organization on how to proceed.

After all, if conversations are being had, then an organization should share their side of the story. However, how they respond will have an impact on the public’s perception. If done poorly, it could make the situation worse.

A PR professional will then be tasked with:

Example of Damage Control in PR

In the early 1980s, numerous bottles of Johnson & Johnson’s Tylenol product were laced with cyanide by an unknown person, killing seven people. This led to widespread panic and could have resulted in the end of Tylenol products.

Johnson & Johnson took aggressive PR measures to mitigate the damage: First, the company pulled all of its Tylenol products off the shelves and issued a national statement warning consumers not to purchase or use Tylenol. Then, Johnson & Johnson created a new tamper-resistant seal and instructed 2,000 sales personnel to deliver presentations to the medical community to reintroduce these new, safer Tylenol bottles.

This effective PR strategy saved Johnson & Johnson’s reputation as well as their product — in fact, Tylenol shares climbed back up to 24 percent just six weeks after the cyanide crisis.

In the case of Johnson & Johnson, a simple advertising campaign wouldn’t have worked. Instead, PR was necessary: PR professionals were able to spread a story that portrayed Johnson & Johnson as a company that puts consumers ahead of profit. Along with mitigating damage to Johnson & Johnson’s reputation, PR was used to save more people from consuming cyanide-laced Tylenol, and then used to inform the public that Tylenol was safe again. A win-win-win.

PR as an Important Marketing Strategy

In these examples, you can see PR professionals are adept at handling a wide variety of both good and bad circumstances and must address these events so the public and client can maintain a beneficial relationship. PR specialists also play a role in advising management on the best policy decisions or actions to take and conducting programs, such as fundraising or networking events, to help the public understand the organization’s goals.

PR isn’t just used to influence a story after it happens — it’s also used to write that story in the first place.

Editor’s note: This post was originally published in April 2018 and has been updated for comprehensiveness.